India has become the fastest-growing market for renewable energy all thanks to the concentrated efforts of the government. Solar power has become more popular and continues to get cheaper, compared to other forms of renewable & conventional energy.

Solar energy is an environment-friendly way of producing energy by installing solar PV modules on rooftops or land. However, the solar PV modules require large amounts of space to be installed on. On an average, the PV plant requires 4 acres of land for fixed tilt per MW and 5 to 6 acres for single axis plant. In order to meet the requirement of land, there is a tendency to end up using agricultural land, which is a counterproductive use of good land.

Some regions in India and around the world have intermittent or no access to electricity. Solar energy, with a life of around 25 years and almost no moving parts, can help meet the electricity requirements. Acquisition of land for the plant is a hassle and the large tracts on which the plant has to be built may be expensive or difficult to acquire, especially considering the ever growing population.

The requirement of large plots of land also attracts restrictions under the ‘Land (Ceiling and Regulation) Act’. 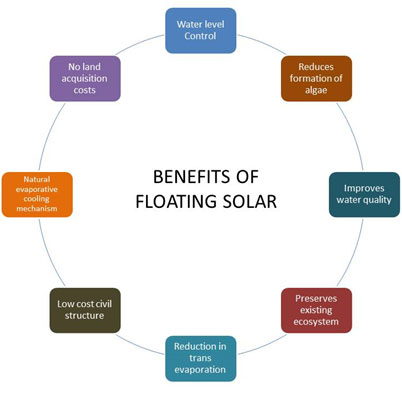 Floating solar power module or floating photo-voltaic makes use of buoyant structures to keep the array of PV modules floating above the water body.

One of the many benefits of Floating solar, apart from almost zero use of land has proven to have a higher efficiency compared to ground mounted solar PV due to the moderating effect of water bodies on panel temperature.

Floating Solar has another big advantage and that is of reducing evaporation of water by up-to 70% as they provide adequate shading. This also results in reduction of algae growth as the sunlight does not hit the water surface in the shaded areas.

A ground mounted solar PV plant, has a life of around 25 years and with regular maintenance will help in optimum generation and optimum functioning of the plant. This holds true for the floating solar plant as well, the added benefit here is that, due to the cooling effect of the panels, the long term degradation of the panels due to heat exposure, is reduced to a very large extent, thus prolonging the life of the plant.

Mahindra Susten has recently received the mandate to build one such plant and has received the LoA for the same. The plant will be located in West Kallada Village, Kerala, India, located at a distance of 15 km from the district headquarters of Kollam.

A large tract of a water-filled wasteland of approximately 303 acres which is currently underutilized is being proposed for the first development of 10 MW. The wasteland has been converted into a water body which is owned by the local community.

A 10 MW floating solar power plant is to be executed by the public sector National Hydroelectric Power Corporation (NHPC). The power generated from the solar power plant will be sold to Kerala State Electricity Board (KSEB) as per a power purchase agreement (PPA) to be signed between NHPC and KSEB.

Technology to be used

The plant will be installed using a High Density Polyethylene (HDPE) base float, which will be modular in nature and scalable for future use. The water body has varying depth of up to 7m with the max drawdown of water in water body is 1.5 meters and max rise in the water level of 1m with respect to shore level.

About 71% of the Earth’s surface is covered in water; the energy potential of this Floating Solar technology is unimaginable! Solar is considered one of the best renewable sources of energy and with its versatile usability. It is rightly said that, ‘Almost all types of Solar energy is a win-win energy solution for all’.