The photovoltaic industry has been dominated by Silicon crystalline technology for several years, mainly due to its simple design, easy manufacturing process and of course scalability. Silicon Crystalline is likely to remain in the mainstream for a few more years to come. It is the most recognised amongst many technologies available at present, because of its relatively high efficiency. However, it has nearly reached its practical limit and further gains in efficiency are unlikely. This has led to further research in various performance improvements projects in PV modules. For improving module performance, manufacturers are either making improvements in existing manufacturing processes or changing solar cell technologies. 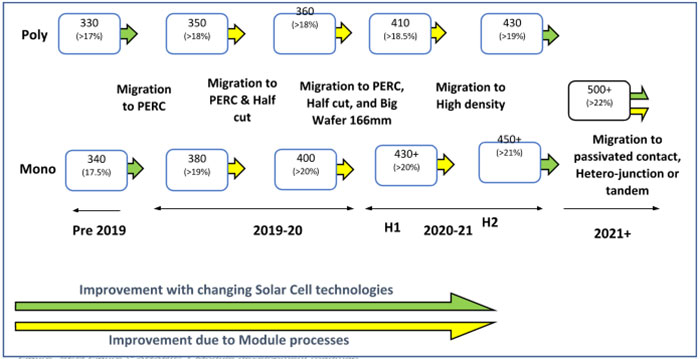 One way is to reduce resistive losses by reducing current density in the module. This can be done by using optimised metallization techniques for solar cells or by reducing current levels in the circuit. New metallization schemes on the front as well as rear side of the cell are being employed to increase the current carrying efficiency. This is achieved by increasing busbar numbers from the existing 5 all the way up to 9 or even higher. Using half-cut solar cells also reduces the current density and thus reduces power losses in the interconnect ribbons.

Recently, modules made using shingling or gapless processes have been introduced. These processes eliminate the empty spaces between cells of a solar module. Solar cells are therefore tightly packed, giving additional power within the same area. A power gain of up to 10 Wp can be achieved with this high-density interconnection scheme.

Section 2: – Performance improvement due to changing solar cell technologies
Until now the solar industry was dominated by conventional c-Si solar cells. This is a tried and tested technology, but further optimization to improve c-Si performance is going to be slow. This has led to the introduction of PERC (Passivated Emitter and Rear Cell) technologies. PERC cell designs are very similar to conventional cells except for the rear surface. In a PERC cell, both the front and the rear of the cell are passivated. The passivation at the rear helps in reflecting the un-utilized photons that have reached the rear surface. This gives the un-utilized photons a second chance to generate additional current and improve performance. This has led to solar cells with upto 23% efficiency. The introduction of larger wafers with such high efficiency is taking module power to new heights.

TOPCon (Tunnel Oxide Passivated Contact) is another cell technology having efficiencies in the range of 25%. Here, the addition of a thin oxide layer reduces recombination losses from the metal contacts and improves passivation from the silicon surface of cells. Limited supplies of N-type wafers are a major constraint for high volume adoption of this cell technology.

Solar Cell technologies in combination with improvements in module processing are paving the path for higher power generating PV modules, and it’s only a matter of a few months in which we will have modules with >500Wp and ~ 22% efficiency.